I started my government career, back in the day, as an engineer for DoD and NASA…yes, I was a rocket scientist! I retired from Federal Law Enforcement, a far cry from my engineering days. I have found that during my retirement, my inner engineer and tech nerd is calling. 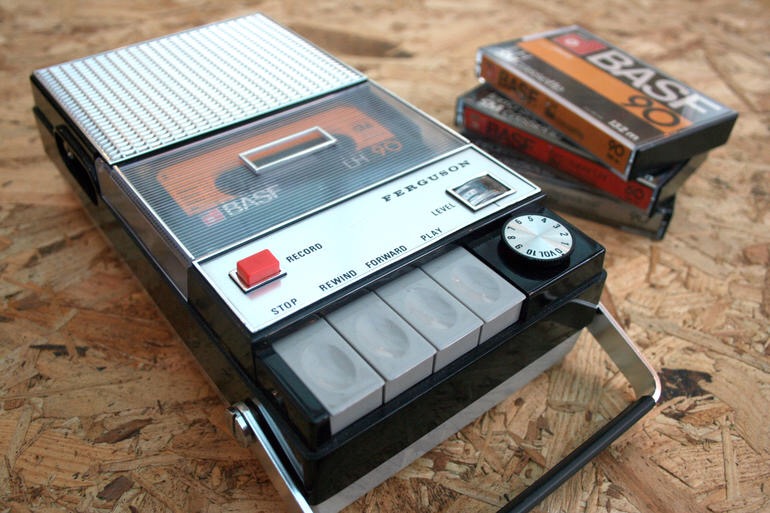 In the IOOF, I like to say “we have 200 years of tradition un-touched by modern technology!” How true is that in your Lodge? I know in mine, we don’t use any technology to our advantage. I actually saw one Lodge using a portable cassette player to play their music! Wow…talk about going back in time! In our lodge, we use a CD in a laptop for music. This is a PIA to say the least! The “musician” has to fumble with the laptop to get the right song…often not playing on cue…or advancing to the wrong song…I know it is a source of constant frustration for him and it sounds cheezy. We can do better. We can work smarter.

In my opinion, our ceremonies should be like theatrical productions. That includes sound, lighting, and technology. For many new members, it is their first exposure to our “inner sanctum”. First impressions are everything, as we all know. We need a “wow” factor, and in today’s society of tech, we need the “cool” factor as well. We need to elevate our organization’s professionalism, quality, and reliability. We can’t get that from a cassette player, laptop, or some of the other antiquated means that are used. Now, an actual musician playing a piano or organ has the “wow” and “cool” factor…but how many Lodges are fortunate enough to have that?

So…enter a cool little electronic platform called Arduino (are-dwee-no). This may get a little techno-geeky…It is a small microprocessor invented by an Italian engineer. The software is open source (free) and based on the C language. It is widely supported on the net and in books. Programs called “sketches” are written on your computer and then sent to the Arduino to program it. After that, the Arduino is stand-alone, meaning no computer needed. The basic Arduino boards are el-cheapo! You can get them on ebay for about $3 each! They come in various sizes. For this project, I chose the “Uno”. Smaller projects may use the “Nano”. Nano requires soldering and is much more compact than the Uno. A lot of Halloween DIY prop designers use Arduino. There is a plethora of sensors, relays, and add-ons, even lasers and bluetooth. All are cheap. All are easily interfaced, and some even plug right in and stack on top of the main board. All of this is supported by a huge user community. Just google “Arduino forum”. They actually don’t require much electronic knowledge and many projects are written in very basic layman’s terms. Programming is also easy to learn…there are many books on the subject. Arduino can be set up so that once a sensor is triggered, lots of things happen automatically. Automation.

OK, back to what I am doing to use modern technology in our Lodge. My first project was built to help and de-stress our musician (nobody wants a stressed out Musician in their Lodge!) and to bring our professionalism up a notch. I built a simple MP3 “Band In a Box” (BiB). The BiB uses one Arduino processor, called an “Uno”, a serial MP3 board, a micro SD card, some switches, and resistors. It took several hours to build. The BiB is powered by a simple 9v wall wort and plugs in to a PA system or speakers. The end result is that I can put MP3 songs on a micro SD card, put it in the BiB, and push a button to play a song. Our musician is no longer frustrated and we sound professional! The BiB can be customized, via MP3 songs on the SD card, for each ceremony. It is completely stand alone and doesn’t need to be attached to a computer.

Now imagine using this in our ceremonies and programming it so all you need to do is push a button for a particular song during the ceremony. I have ours set up for Opening, Closing, March, and special music used during the initiation. It also has a reset/stop button. No more CDs. No more cassettes. No more 8-tracks, etc. Technology has arrived!

My next Arduino project, now in development is a Lodge Ceremonial Light Controller (LCLC). Remember, I was government…I like acronyms. I am going to set it up so that when our Bible is opened, two LED candles beside the alter come on first, then after a set delay, small LED spotlights come on in succession that shine on the NG, VG, PG, and Chaplain’s podiums. When the Bible is closed, the lights turn off in reverse succession with the candles by the alter going out last. Imagine being a new initiate and seeing that for the first time! Wow factor? How’d they do that? Dang, that’s cool! I’ll probably use a photocell for the sensor. We can dim general lighting, and ceremonies will have more of a theatrical and mystical feel, and the officers will have enough light to read their parts. That should give us both the wow and cool factors! All very cheap and easy to do! I’ll be posting another blog about this in the future once I have a working model. Imagine what other special effects we can design!

I’d like to hear if any other Lodges out there have used technology, or even Arduino, to their advantage. Please drop me a line! ScottR@iooflewisburg.org

Our Lodge is fortunate in that we just purchased a beautiful 1870 farm to establish our new Lodge. We will be building it in the barn. Since we are building our Lodge, we will be able to incorporate tech into the new Lodge. Hopefully, we will have a lot of the wow and cool factors!

It’s time that our 200 years of tradition get in touch with modern technology. In the meantime, check out Arduino! Attached are some photos of the BiB v1.0.

BiB14 – Completed Band In a Box 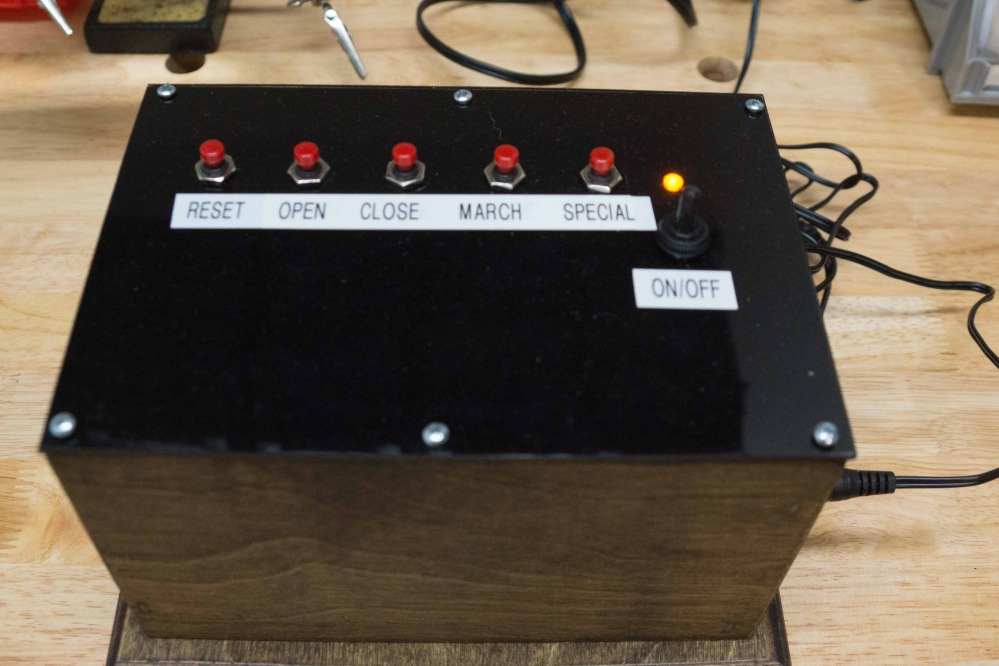 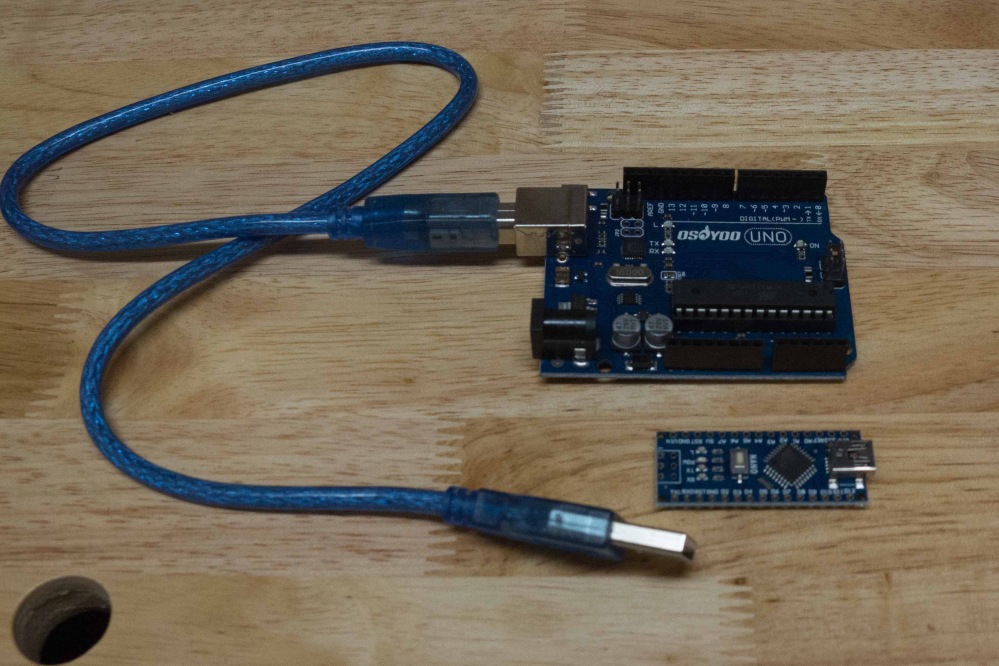 BiB5 – Soldering is required. This is the back of the control panel. Switches and an LED on/off indicator. Resistors are to stop electrical “bounce” (false triggers) in the switches.

BiB6 – The Uno and MP3 player wired up. For this application, I soldered all leads for reliability.

BiB7 – There are all kinds of Arduino starter and experiment kits available. This is a basic one and cost $20 on ebay. Most kits are supported by forums and are easy to learn. 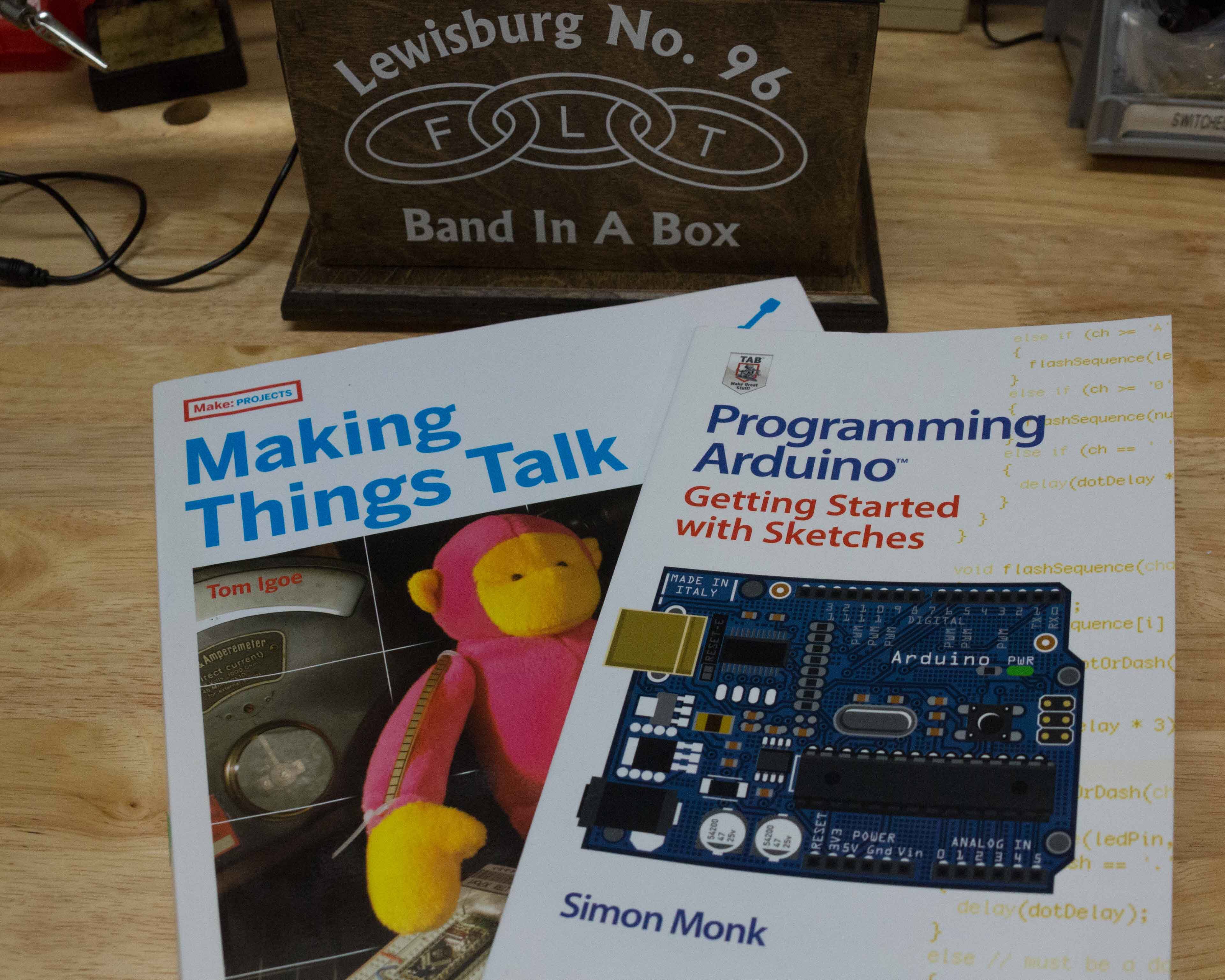 BiB8 – Lots of books are available on Arduino…some written for absolute beginners.

BiB9 – This is a breadboard and experiment setup that I use to test applications.

BiB10 – Some of the many sensors and ad-ons for Arduino. Top – 8 station relay board. I will use this to control the LED spotlights in our Lodge; 2nd Row – Passive Infrared Sensor (motion detector), Laser (used with sensor to detect when someone breaks the beam), Audio (VU) meter board; 3rd Row -Single relay, Ultrasonic (proximity) sensor, Bluetooth board (can interface with smartphones); Bottom Row – Temp/humidity sensor, 5VDC power adaptor.