First a little bit about myself. My name is Todd Swanson and I live in Salem Oregon. I am a Husband and father to two beautiful girls. I attend church where I am involved but have recently wanted something more in the way of community. While perusing the internet for information about fraternities, I noticed a growing body of active Odd Fellow members on Facebook and Instagram etc. So in October I made the jump and decided it was time for me to join the proverbial “Chain”.

In October, I along with 5 others, were initiated into Chemeketa Lodge #1 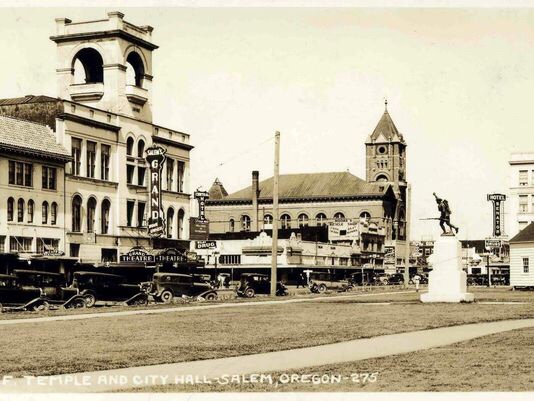 Being a musician, one of the first things I noticed inside the lodge was the piano and organ siting silently in the corner. This aberration made me wonder what place music had in the workings of the lodge. Thus began a very fruitful search down a rabbit hole of musical discovery.

In the past, music played an integral part of lodge life.  In fact, many lodges had full regiments of marching bands, singers, and choirs. Today, many lodges still use music for various purposes such as the opening and closing of lodges, initiations etc. In fact, many lodges have a good deal of musical talent and this is why our Grand Lodge made provision for the Musician as one of the lodge positions.

In the past several years it appears Odd Fellows has been in the beginnings of a period of renewal, to that end I am committed to reclaiming our musical heritage. I began my search for any music or books on Odd Fellowship online and unfortunately did not find much.  YouTube has a few recordings of the odes put to some familiar tunes but not much else. Looking through music books on Archive.org turned up some marches and other IOOF related songs.  I found several references to a historical work entitled “The Odes of the Independent Order of Odd Fellows With Appropriate Music For the Use of Lodges and Encampments Also for Rebekah Degree Meetings Anniversary and Funerals”.  In the book it appears that some tunes are reworkings of Hymns and Patriotic songs (ex. What a Friend We Have in Jesus), while other tunes appear to be original works by various artists.

The 1st ode “Columbia” in the book is credited to Brother John H Siffert and is possibly a reference to the DC lodge of the same name.  John, a pharmacist by trade, was born in lived in the District of Columbia.  His was registered with the War Dept. under Office of Adjunct General around the turn of century and served as Grand Treasurer of the DC Encampment.  John was a sizable contributor to both the work of the odes and “The Official History of Odd Fellowship: The Three Link Fraternity” (Henry Leonard Stillson 1899). 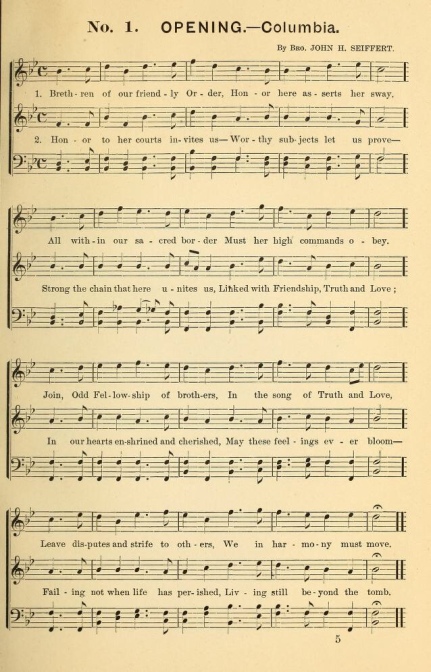 The first thing you will notice in the image of “Columbia” from the Odes book is that the music is old and depending on your eyesight some of the notes are very difficult to read.

For clarity, the goal of my personal project is to make the odes more accessible to the greater Odd Fellows community. So the first thing I did was to produce with music software a clean copy of the first ode “Columbia” to play at my piano. When I sat down to play here is what I heard.

As you hear from the audio this is not a tune most are familiar with. In fact, I could find no other references to this tune. The tune is not a variation of “Columbia the Gem of The Ocean”or “Hail Columbia” or any other Columbia song I could find for that matter. Even a search of musical tunes at Hymnary.org produced no results.

Therefore, until further information presents itself one can safely assume this piece was actually written by Brother Seiffert for the IOOF as credited.

Going a step further from his original I have added chord harmony to the music and produced a corresponding lead sheet in both the original key of Bb and easier to play A. It is my hope that this more accessible music will be both a blessing and resource to future Odd Fellows.

Feel free to use this material in your lodges. However as this project is a labor of love, and is my arrangement and a representation of a great deal of time please do not sell or publish any of the new arrangements without my express permission.

5 thoughts on “Reclaiming the Odes- COLUMBIA -by Todd Swanson”