The very first Odd Fellows funeral in the United States took place in Maryland:
“Some time during the spring of 1823, Andrew Wark, a member of Franklin Lodge, No. 2, was accidentally knocked from the deck of his vessel into the waters of the Chesapeake Bay, where he was drowned before help could reach him. For some reason, whether it was suggested that as OddFellows this was the only course to pursue…arrangements were made for this funeral to be conducted under the cover and darkness of midnight…At any rate, about eighty Odd Fellows were in the procession when the remains of Andrew Wark were carried from his residence and placed in the hearse at 11 o’clock on that particular night in the early spring of 1823. To those who observed this procession, it must have presented a novel spectacle. The officers and members were garbed in their peculiar costumes, the files marching in divisions of ones, threes, or fives; while the torch bearers completely surrounded the hearse as the entire procession 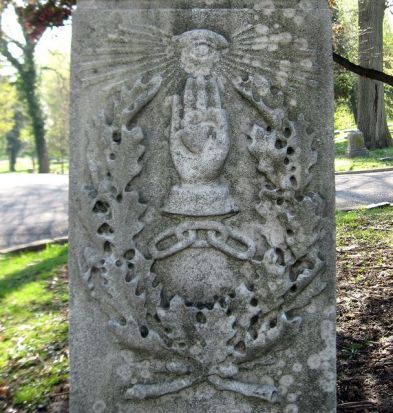 slowly wended its way through the streets of Baltimore toward the “Silent City of the Dead.” Upon reaching the cemetery, the corpse was carried from the hearse and lowered into its last resting place on earth just at midnight; after which, each brother present as he passed around as silently as possible, placed a shovel full of fresh earth above the cold form in the open grave. To a spectator, these men might have appeared as a band of mutes, as not a word was spoken during the entire ceremony…the procession reformed and marched from the place of interment… –“Odd Fellowship in America and Texas, W.H. Foster

olkore. He grew up on a cotton farm and is currently a  museum worker. Hobbies include: old house restoration, writing, amateur radio, Irish traditional music, archery, craft beer, old spooky movies, and street performance.  He is a member of Marshall Lodge #1, in Marshall, Arkansas. He is a founder of Heart in Hand blog.