Ryan Sumner is a Past Grand of Waxahachie IOOF #80. A Patriarch of Queen City Encampment #103. A Rebekah from Waxahachie #381. A Sheik and District Deputy Supreme Officer in the Ancient Mystic Order of Samaritans, Jackalope Sanctorum #333. He is also a Muscovite and an Entered Apprentice of Reagan Masonic Lodge #1037 AFAM.

How AMC Installed a Lodge in Every TV in America, & We Missed It. 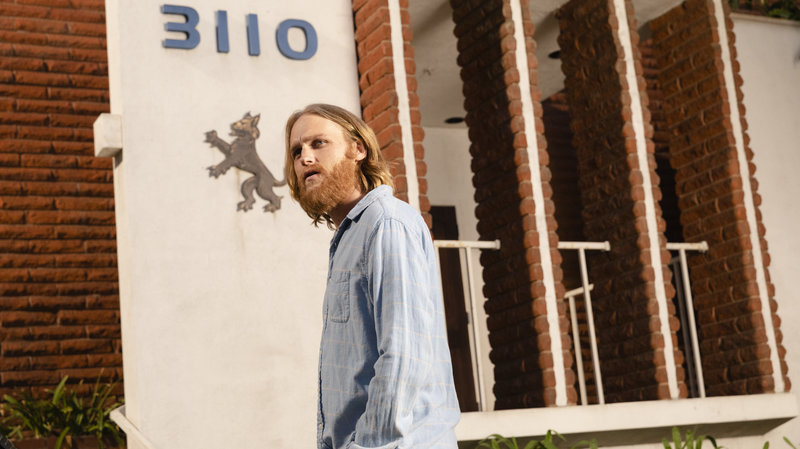 Often times, when I talk to someone about a Fraternal Order, one of the most frequent responses is,”Does ______ even exist anymore?”  To which, my reply is usually something along the lines of,”Actually, yes; and their Lodge is just down the street.” If the Fraternal Orders of our nation suffer from anything today, it is being hidden in plain view. One thing that I’ve always found, however, is that they are always there, with plenty of treasures,  for those seeking to find. And such, are the mysteries of our Orders.

Somehow, AMC managed to pull this exact effect off with an entire tv show, which is now available to stream or view anywhere one gets their programming.  I didn’t even realize the show existed, until we were several episodes into the season. I was shocked,”How did we not hear about this? How were Lodges not involved in the marketing? How did our Grand Lodge not notify us of it?  Every great movement in history always has echoes in art, fashion, media and lifestyle. The West is in the midst of a revival in Fraternal Orders and we must capitalize on the awareness and exposure!” I had to check it out.

AMC’s Lodge 49 centers around the life of a down-and-out millenial, Sean “Dud” Duddley (Wyatt Russell), who is seeking; and the run-down castle of the Ancient & Benevolent Order of the Lynx, which he finds.  The entire production, from writing to set design has a very real echo (unintentional or not) to many aspects of fraternal culture, and the way they play out in many of our personal journeys. I am not sure if any Lodges were consulted, or if any members of the production belong to any order; but much of my scepticism is reserved, in favor of my anticipation of what could be revealed with each new installment.

Like the main character, much of the script seems to have a lack of cohesive style and the entire show seems to be trying to figure itself out; though many critics have said that it is highly rewarding to the viewers that stick it out and watch the story come together. I couldn’t help but be reminded of the many first impressions I had, the first time I entered a Lodge room. The seemingly disjointed symbols, the regalia, the words, tokens, and mottos; what did they mean? Was it more or less than I imagined? It reminded me of my early excitement and the anticipation that each meeting and degree gave me, as they delivered further understanding of each piece of our fraternal puzzle. I binge-experienced Odd Fellowship, by craving and seeking every opportunity, every lodge, every auxiliary degree, every office available, until, as PG, I exhausted it all, and then found deeper meaning in that which I’d already discovered, by relaying it to the next generation of new brothers. Like the symbols on the inside of our buildings, Lodge 49 is full of small mysteries, that leave me hungry to discover their truths.

Many of us craved the Lodge family because we, like Dud, were searching. Many of us felt alienated from or lost family members. Some of us had lost relationships, faith, community. Being strapped for cash, Dud goes to a pawn shop to borrow money for dues; and I am immediately struck by how far we will often go for acceptance.  Lodge was where we regained some sense of that familiarity. And some of us even discovered more than we imagined. Most of us had never even heard of Odd Fellows before discovering it. And many of us, like Sean Dudley, had driven past a Lodge or seen the symbols our entire lives, without realize the world that was on the other side. I had no idea my Triple Great Grandfather was an Odd Fellow til I learned what the three links on his tomb stood for. One of the things I’ve learned greatly, especially in my Masonic work, is that sometimes you don’t see something unless you’re looking for it, and Lodge 49 captures that perfectly. The first episode perfectly illustrates the ancient inititiate’s maxim,”Knock & The Door Shall Be Opened”.

Another area Lodge 49 gets it right is the cast of characters and their concern for their Order.  Every active Lodge has a gamut of members, from those obsessed with the esoteric, to the social members, the family lineage crew, the ultra quiet or the charismatic. There are the blue collar guys, the girls that can hang, the young guys just wanting to figure it all out,  the GenX pot dealer that spouts degree-based wisdom with real life application. ABOL #49 is a healthy lodge with a diverse cast of almost every ethnicity and background, all sharing their lives together in a quirky, slightly dysfunctional social family.

An important issue for all Orders was also addressed in Episode 1. The idea of accepting someone with a less-than-savory past. Our hero Dud, we sense, has had some run-ins with the law, and you can see the fear in his eyes that this will preclude him from membership.  I know, personally, a couple of men who were rejected from Freemasonry, and found home in the Odd Fellows because of their legal struggles in the past. As those seeking fraternity and enlightenment, we should be granting access to the least among us searching for the redemption that inspires many of our degree work. I would urge all Lodges to open their hearts and minds to any individual seeking to better their self and their community, regardless of their past transgressions.

As a former resident of Los Angeles, Lodge 49 kills it with authenticity. Long Beach is so accurately portrayed in this opening episode. It’s definitely one of those places on the map that was neglected, and home to many older, working-class families, that is currently seeing revival. Several moments are highlighted by a kid putting “We Buy Junk Cars” flyers on the character’s vehicles and that simple detail made me feel like I was back on the streets of Hollywood again, walking to my 1995 Ford F150 on my way to work.

Spoiler Alerts, Next 3 Paragraphs: One thing that really frustrated me about this opening episode is how they handle the dues situation. Firstly, most Lodge dues, these days are no more than $35-100 a year; and I fear the repercussions of perpetuating the rumor that they are higher.  However, there is NO way that a member of the Order would lie about dues for personal gain, as Ernie Fontaine (Brent Jennings) did. One would be caught so easily, and banned for life. I can think of few people with so little character, that they would have worked through the offices of the Lodge, only to abuse their position for that kind of personal gain. I know I’m being a bit naive, but It really leaves little room for redemption, and I am curious to see how they play this part out. All that said, the down-on-his-luck, salesman Ernie Fontaine is a delight of a character and perfect juxtaposition to Wyatt Russell’s dead-beat surfer.

I also didn’t like the treatment of alcohol in the lodge. One thing I was often told about my grandfather being a Mason is,”For most, Masonry is like any other social club where a bunch of guys get together and have a couple of beers.” This opinion of Lodge life, from people who have never even attended a Lodge meeting, takes much away from the serious work we do for the betterment of the individual and community. It also couldn’t be further from reality.. The Lynx even cite “temperance” as one of their values and it’s not being practiced if they run a bar. I know groups like the F.O.E. & Elks are more bar-oriented, but I truly wonder how many would allow members to openly over-indulge, while wearing ceremonial regalia.

While the men in Wyatt Russell’s family (Kurt & Bing Russell) definitely strike me as Traveling Men, I could find no evidence that they belonged to any Order.  Regardless, I would really love to find out that Dud’s father was a Lynx; and that this helps Sean Dudley find healing and closure through his search. 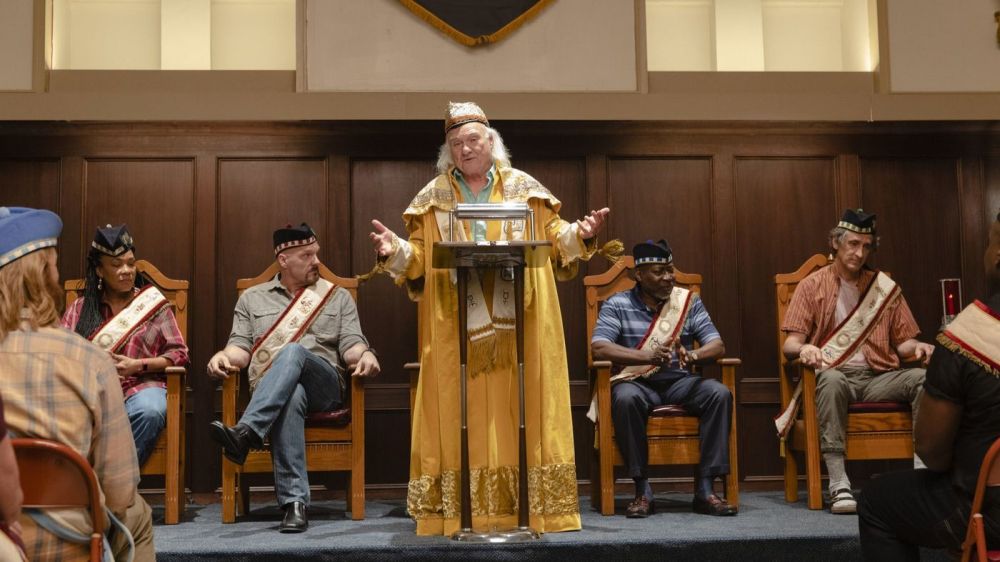 So whether they asked our permission or not, AMC and Paul Giamatti produced a highly-accessible TV show with great costumes, wonderful locations, very relatable stories… and just like many of our personal searches, we found it at the time that we didn’t realize we needed it. There are some things that missed the mark, but they hardly stand out enough to discredit this project.

I’m very excited for the conversations this opens in our Lodges, our communities, and our media. I also am very eager to see the paths of every character we’ve been introduced to so far. Like the secrets, mottos, tokens, and morals of our sacred mysteries; I await the time with patience until the story is made known.

8 thoughts on “How AMC Installed a Lodge in Every TV in America, & We Missed It -by Ryan Sumner”