The Corvallis Odd Fellows  just sponsored an Odd Fellows themed mural that was painted by artist Alice J Marshall.  It is part of a larger downtown project called the Corvallis Mural Project  which “seeks to establish a comprehensive network of mural activity and engagement by artists, property owners, and the community.”

Creative projects like this are a great way to help raise awareness of who the Odd Fellows  are and what we do.  We have such a rich symbolic and visual identity that is just begging to be turned into an artistic statement. Imagine having a project like this in your town that your Lodge could take part in?   I for one would love to see this happen in my town! 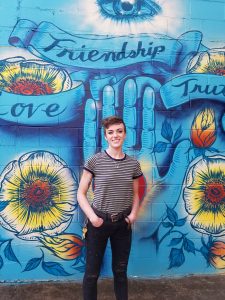 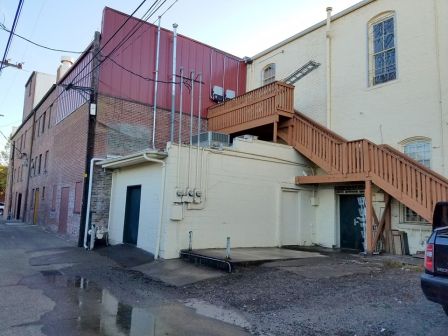 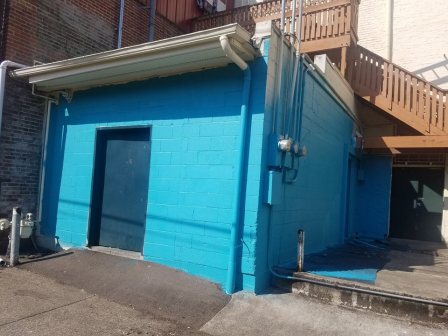 The mural location with a fresh coat of blue paint. 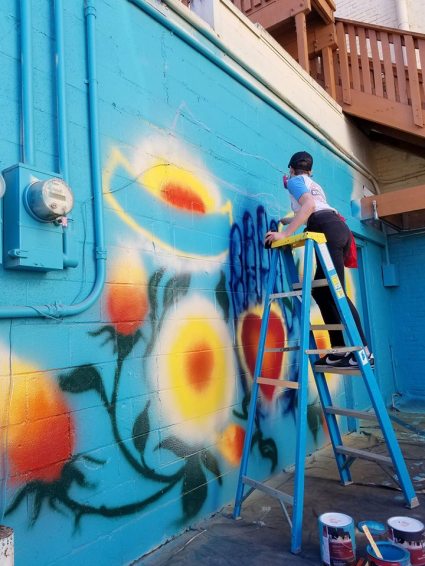 The artist at work

From the Corvallis Advocate

Walk down the alley behind New Morning Bakery, around the potholes, past some overturned and worn office chairs, and you will find one of the newest murals in Corvallis. Alice Marshall, a native Oregonian, is painting The Odd Fellows Mural, named after the local Odd Fellows chapter who collaborated with the Downtown Corvallis Mural Project to bring some color and meaning to the otherwise drab alleyway.

Laughing, Marshall recounted her father’s first visit to the mural site, “He walked up and said, ‘I like your mural next to the dumpsters.’”

Marshall carries a sense of humor and reverence to her work on the mural, a combination that shows in the symbols she and the Odd Fellows chose. The mural has a botanical Latino theme with large, playful flowers imposed on a background of various shades of blue. In the center of the mural lays a hand with a brilliant red heart in the middle of its palm, and three banners above stating the Odd Fellows motto: friendship, love, and truth. Overlooking the scene is an all-seeing eye.

The symbols are not merely beautiful images, they hold meaning for both Marshall and the Odd Fellows organization. Started in 17th century England, the “odd fellows” were named for their dedication to giving aid to those in need. The present-day Corvallis Independent Order of Odd Fellows chapter, founded in 1858, still supports local and international charities.

After learning about the Odd Fellows mission, Marshall quickly came to appreciate their outreach efforts and uses the mural to share some of that altruism with viewers.

“I don’t like buttons that don’t work,” Marshall states after describing how each piece of the mural has a purpose.

She is creating the mural as a “seek and find” that viewers can interact with, the first of its kind in Corvallis. After the mural is finished, there will be a plaque to guide the audience through it.

The mural also reflects some of Marshall’s own personal history. When asked why she chose a botanical and Latino style, she said it reflected her own values and background, much of which she received from her parents. Her father is a landscape architect and botanist, her mother is very involved in the Latino community, and this mural pays homage to them.

With a background in print making and small art, Marshall said she never considered larger work until she took a mural class with Andrew Myers at Oregon State University in 2013. Murals were a nice contrast from her typical, tight-lined tiny work, and the new form allowed her to connect with communities instead of living in the introspective world of her tiny art.

“Muralists have to be more selfless with their work,” Marshall said, “you get so much interaction while making the art. Kids come up asking questions, and their parents try not to let them take up too much time, but it’s important as a muralist to connect.”

Alice Marshall graduated from OSU with a visual arts degree. The Odd Fellows Mural is her second mural with the Downtown Corvallis Mural Project, her first being Wings, which is located behind the downtown American Dream Pizza.